Estancias, the farms of Paraguay Cattle farming in Paraguay

With large natural spaces, Paraguayan livestock farming meets the growing demand from consumers for products defined as organic. The herds live in the open in large green pastures and unhindered, ensuring the quality and welfare of the animals. 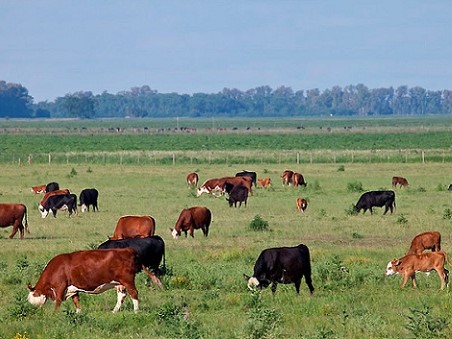 Extensive breeding provides breeders with the lowest production costs and makes Europeans dream, as shown by the figures below:

Paraguay is developing new breeding skills through the use of natural products to replace antibiotics, for the treatment of its herd.

Capital Campo collaborates with the various international bodies in charge of human health and animal welfare to draw up specifications, as well as to create a label.

Different possibilities of exploitation on an Estancias of cattle breeding like the sylvopastoral system. The sylvopastoral system is the combination of the activity of the breeder and the forest management. The objective is simultaneous or consecutive handling, to develop the soil’s potential and durability. 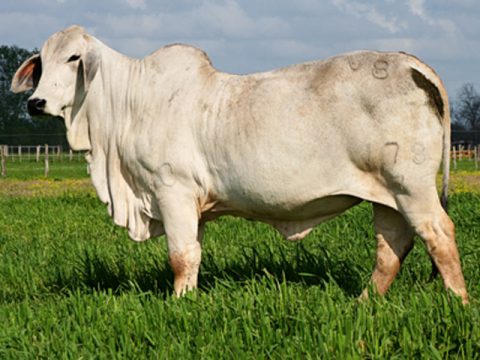 Brahmans have a dark skin pigmentation, which filters out the intense rays of the sun and enables them to withstand extreme temperatures. They also have an ease of environmental adaptation, giving them the ability to travel long distances to find their food and water, while being resistant to insects and external parasites. Females also reproduce regularly, regardless of their environment and offer increased longevity. Calving assistance is not necessary. Calves gain rapid weight.

The Brahman breed on Wikipedia 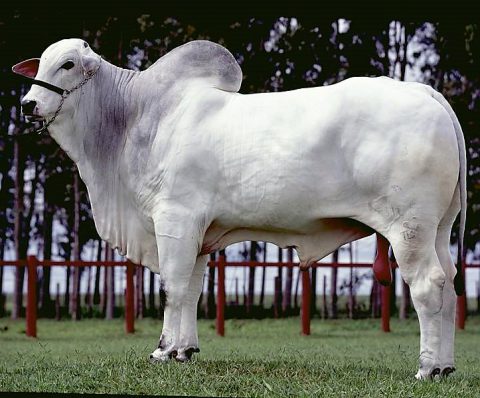 The Nelore is a species of “Bos indicus” (Zebu), characterized by the presence of a hump behind the neck.

The first Nelores appeared in Brazil in 1868 and grew rapidly to become the most common breed in the Brazilian herd today.

It is a hardy breed very popular in South America, well adapted in the tropics and subtropics. Their skin, black and loose, is covered by a white or light gray coat, which filters and reflects the harmful rays of the sun. Its low level of metabolism also contributes to thermal resistance, as Nelore feeds in small amounts, but regularly, thus producing less internal heat. Their thick and dense skin protects them from various insects and parasites.

Females are fertile and easy to calve with a highly developed maternal instinct. They have small udders and short teats, keeping them away from infections. Calves are vigilant with active behavior, rising and suckling from birth, without the need for constant human intervention.

The Nelores have a notable physical resistance and can thrive in difficult climatic and nutritional conditions. They are able to travel long distances for food and water.

They are relatively wild animals and handling them requires some experience.

The Nelore breed on Wikipedia 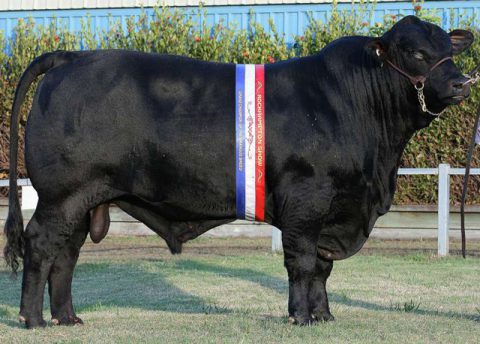 The Brangus is an American hybrid breed, made up of European beef, “Bos taurus”, and Zebu, “Bos indicus”. It is a breed created in 1932 in the state of Louisiana, from the crossing of Brahmans, known for their resistance to tropical diseases and heat, with the Angus, a very productive breed and recognized for the quality of its meat.

The American Brangus Breeder Association was created in 1949 giving a pedigree to the breed with around 3/8 Brahmin and 5/8 Angus. The breed, adapted to tropical climates, spread to Mexico and then to South America.

The Brangus has no humps or horns, its uniform coat is black, Black Brangus, or red, Red Brangus, depending on the origin.

The Brangus breed is resistant to the difficulties of the tropical climate, with good acclimatization to hot and cold. Maternal instincts, inherited from the Brahmans, give the Brangus an excellent yield on rich pastures, but also an honorable yield, even superior to many other races, on lean pastures.

The Brangus breed on Wikipedia 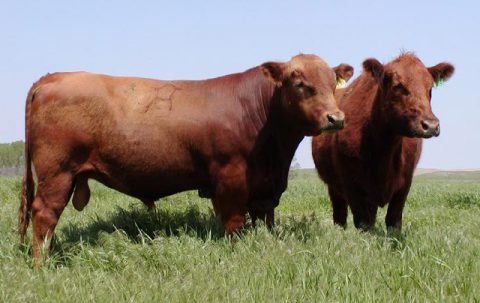 The Angus or Aberdeen-Angus is a breed native to the Aberdeenshire and Angus counties region of Scotland. The breed is the result of a cross between predominantly black, hornless “Angus doddie” and “Buchan humlie”. The Angus breed was officially recognized in 1835 and the first herd book published in 1862. The first animals were exported to the United States and other countries in 1878. The American Breeders Association of Aberdeen-Angus was founded in Chicago, Illinois, November 21, 1883.

It is a tough, easily adaptable, undemanding and extremely precocious medium-sized breed, widely used in crossbreeding. The Angus tolerates winters like heat and humidity.

Females calve easily, in part due to the small size of the calves and exhibit good maternal abilities.

The Angus breed on Wikipedia 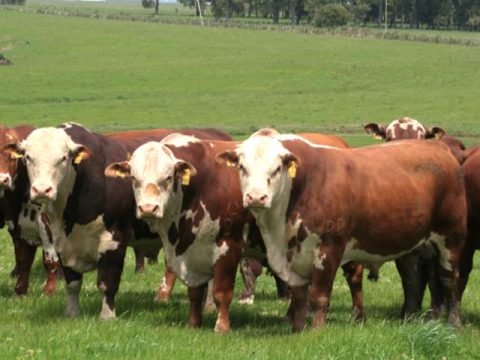 The Braford breed was developed in Florida in St. Lucia County by Alto Adams jr. on her ranch from 1947. She comes from a cross between Brahmin and Hereford. Two competing breeder associations each created their own herd-books in the 1970s and 1980s. These associations merged into the United Braford Breeders (UBB) in 1994 and merged their genealogical records.

The breed is composed around 3/8 Brahmin and 5/8 Herford, but the herd-book accepts 5% variation to allow adaptation to local climatic and soil variants.

The Braford’s coat is red with white limbs and belly. Males have straight downward horns and cows have upward crescent horns. Their thick, parasite-resistant skin is looser than that of European cattle and adapts to tropical hardships.

The Braford is known for its good maternal qualities, fertility, precocity, ease of calving and good lactation.

The Braford breed on Wikipedia 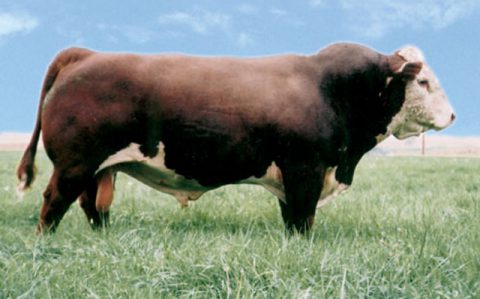 The Hereford is an ancient breed that originated in the county of Herefordshire in England. The first herd book was published in 1846. The breed was developed to meet a growing demand for food, created by Britain’s Industrial Revolution. A bull and two cows were brought to the American continent in Kentucky, by Henry Clay in 1817.

The Hereford usually wears a red coat with a white head, some specimens have a black coat. The limbs, ventral line and withers are also white.

The Hereford breed is hardy, docile, easy to rear outdoors. Its ability to walk is an asset for pasture breeding.

Breeders pass on their morphology to their offspring and are sought after to improve crosses.

The Hereford breed on Wikipedia 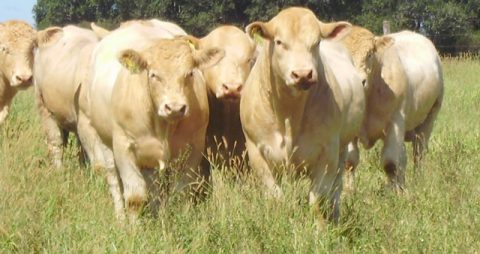 The Charolais is an ancient breed of French origin from the Charolles region in Burgundy.

In 1864 the first genealogical register was established by Count Charles de Bouille in Nevers for the Nevers-Charolaise breed. Another genealogical register was established by breeders from the Charolles region in 1882. The two groups merged in 1919. In 1930, two bulls and 10 cows were introduced to Mexico by a young Mexican industrialist with the French name Jean Pugibet. Due to import restrictions, it was not until the mid-1960s to import Charolais again into the Americas.

Charolais are white or cream in color with appreciable skin pigmentation. Charolais is a naturally horned beef. They are heavy and large animals. Charolais bulls are widely used in crossbreeding, particularly for the improvement of small animals.

It is a rustic breed, able to adapt to very different environments. It shows great ability to use its fat reserves in the event of a drought in tropical regions. Charolais is perfectly suited to extensive breeding thanks to its high ingestion capacity and its ability to enhance coarse pastures. Docility is one of its assets and facilitates the handling of large herds of extensive breeding.

The Charolais breed on Wikipedia

Our team of experts are there to support you in all investment project studies in Paraguay.